When Kevin Sullivan decided to launch Anne of Green Gables A New Beginning, (which is both a prequel and a sequel to his original film) he was faced with the fact that many of the locations he had originally filmed at no longer existed. This presented some unique challenges.

His fourth film in the Anne of Green Gables series of movies was released in 2008 to celebrate the 100th anniversary of Lucy Maud Montgomery's novel: "Anne of Green Gables." It aired on CTV in Canada and PBS in the United States and told an entirely new story, which Sullivan based on aspects of L.M. Montgomery’s own personal life that he felt mirrored Anne’s character. Anne of Green Gables A New Beginning stared a whole new cast:Barbara Hershey plays an older Anne (in her 50’S), Hannah Endicott-Douglas plays a very young Anne (of 10 years old), Rachel Blanchard is Anne’s mother’s best-friend Louisa Thomas, and Shirley MacLaine is her autocratic mother-in-law and business owner, Amelia Thomas.

You may have seen the film, but you may not have realized that much of it was not filmed on location. Many of the scenes for Anne of Green Gables A New Beginning were filmed with the technology of Green/ Blue Screen and CGI (Computer Generated Imagery). This technique was used to digitally create backgrounds and specific details that could not be captured through filming on location. Sullivan worked with two Toronto special effects studios:Pix Ray and Ghost FX who created hi-resolution CGI animation. For certain unique scenes, it became easier to film in studio with performers and using visual effects, than to attempt to transport a large crew-unit to a remote location, or in some cases to try to rebuild buildings or locales from the original films that no longer existed. All of the physical film-locations that were ultimately utilized were in close proximity to Toronto, Ontario. All of the Green and Blue Screen scenes were then filmed at the Sullivan Entertainment Studios in Toronto. Blue and Green screen is a technique where actors are placed to perform in front of a brightly colored flat green or blue backdrop.When the footage is taken into a computer, the blue or green backdrop is removed (“keyed-out”) by the computer. The actors and the small studio elements are filmed on a sound stage and then brought into a boundless computer-generated world that allows the freedom of creating an original, authentic seamless environment for the actors to perform against. 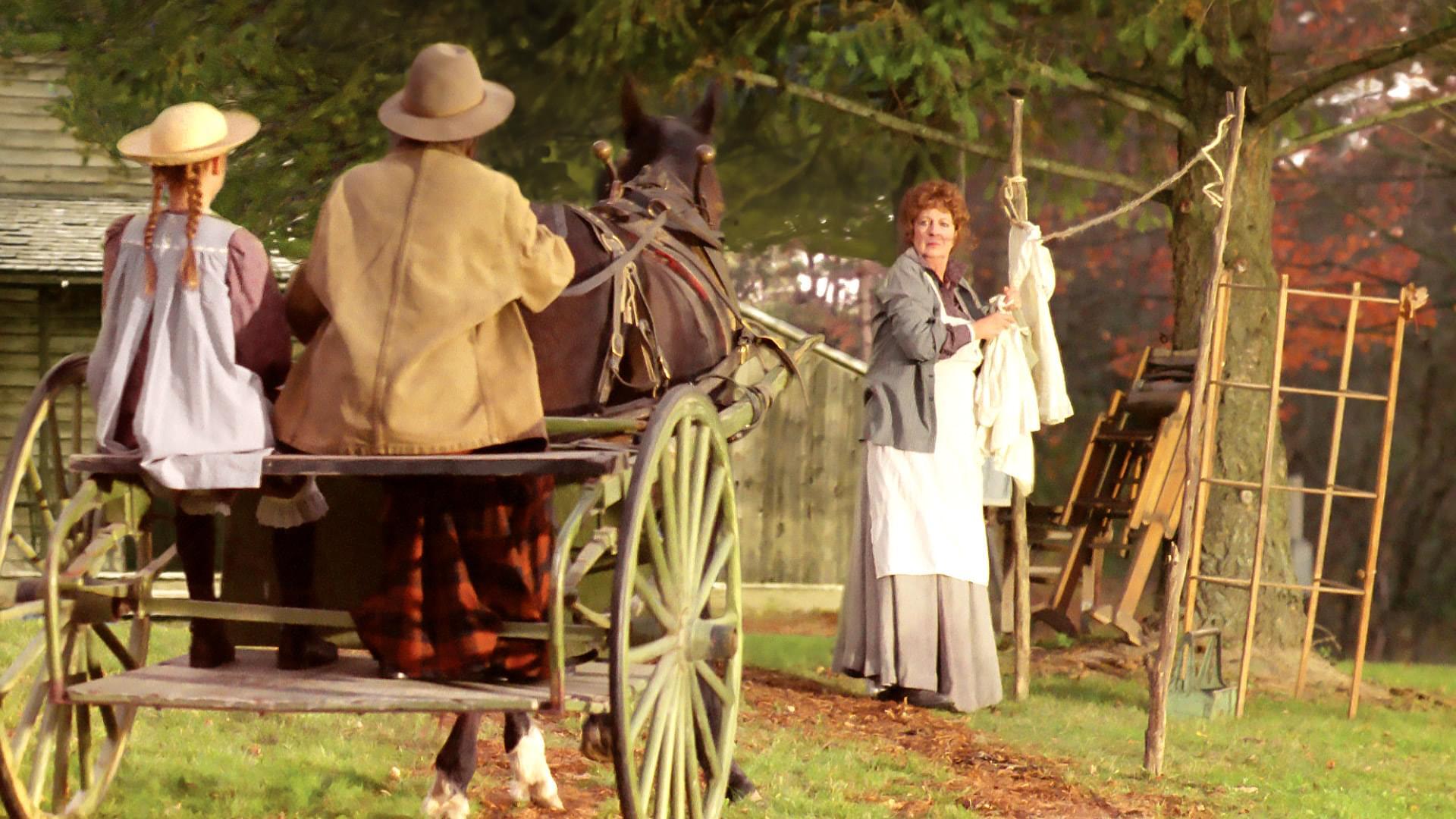 Such Green/Blue Screen (CGI) studio scenes included a young Anne Shirley being taken to live with the Hammonds for the first time (before the beginning of the original starring Megan Follows). In this scene young Anne is driven in a buggy to be handed over to work in an outback household where Mrs. Hammond (played in both the original film and this prequel by actress Jayne Eastwood) is hanging laundry outside her dilapidated house.

The original building was shot in 1985 at Doon Pioneer Village near Kitchener, Ontario. It had recently been painted completely white; its grey/brown barn board that appeared in the original Anne of Green Gables had been completely eliminated. In order to replicate that specific house, Sullivan would have had to have rebuilt the building as a studio-set.  Instead Sullivan filmed the entire scene with a tree and a laundry line in front of a Blue Screen. The original building was then digitally recreated in 3D from existing still photography. 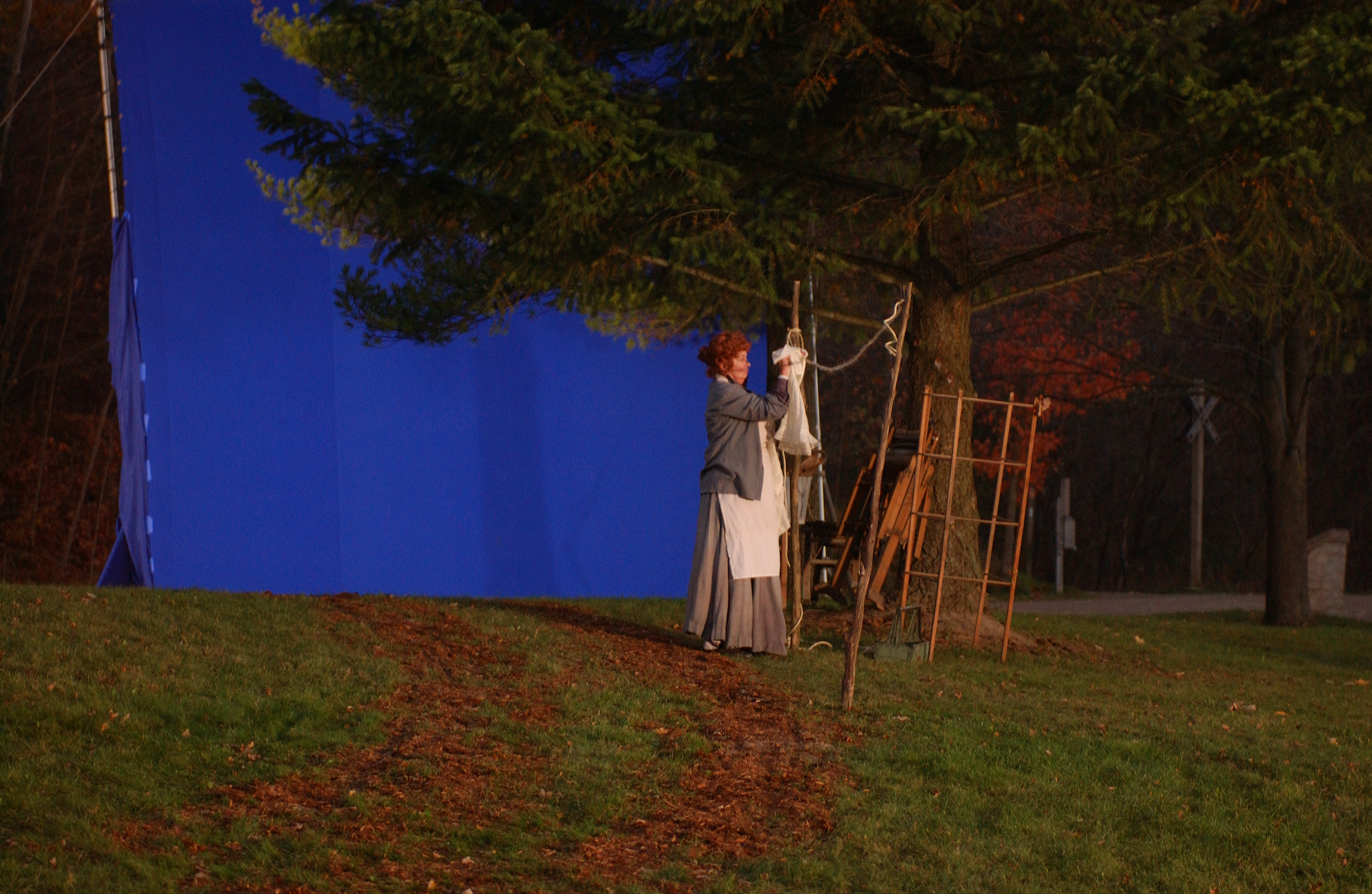 Other scenes that utilized CGI technology include a scene that takes place on the famous PEI foot-bridge on the river where Gilbert had once rescued Anne in Anne of Green Gables, while clinging to a wooden piling after her skiff sinks. This was also the location where Gil and Anne become engaged in Anne of Avonlea. When Sullivan scouted the location for Anne of Green Gables: A New Beginning, for a scene he wrote where older Anne returns to the famous bridge, he discovered that this beloved bridge located in Stouffville, Ontario had fallen into disrepair and was now a condemned structure with no access! Sullivan immediately decided to rebuild the bridge inside the studio.

The production team reconstructed the whole world around the bridge through digital photography: rippling water, wind blowing in the trees and even the birds around the bridge were all animated using CGI. Such details were important to create authenticity. In animating a world that was familiar to many,it was critical that everything look as real as possible. 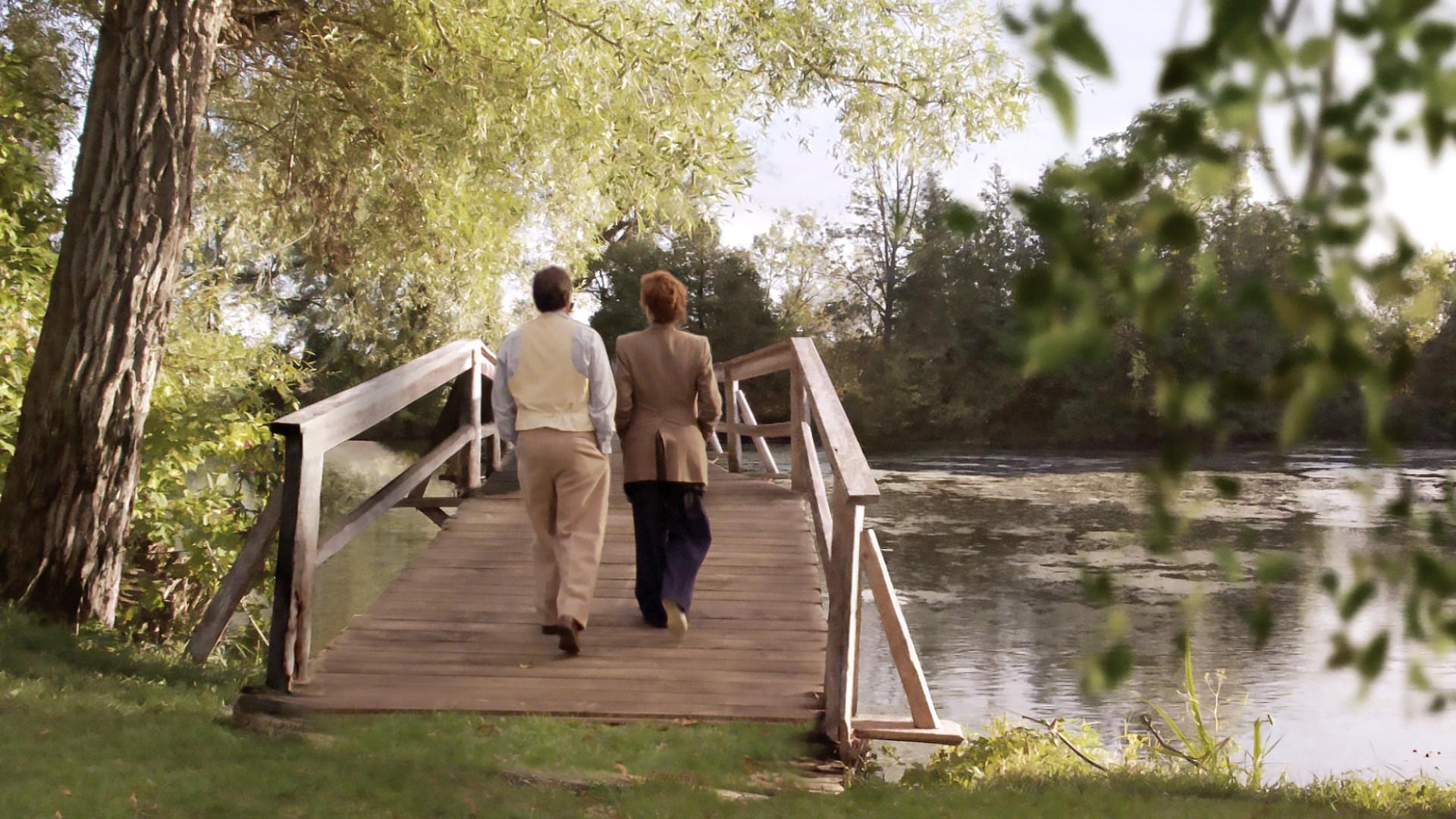 Other notable scenes filmed with CGI technology include Anne (Hannah Endicott-Douglas) and Mrs. Thomas (Shirley Maclaine) as they visit an old Mill and discover her daughter-in-law (Rachel Blanchard) in a rendezvous with Anne’s father (Ben Carlson). The exterior of the mill was created in a computer to look like other authentic grist-mills of the period while the interior of the stone-mill was filmed on a studio-set.

The opening scene where older Anne (Hershey) reclines in a wicker chair on a PEI beach in the grass and sand dunes outside the original famous White Sands Hotel was another challenge. Since the production-unit was unable to travel all the way to Prince Edward Island to film this single scene at the famous Dalvay-by-the-Sea (the setting of the original White Sands Hotel in Anne of Avonlea and Road to Avonlea), the scene was shot against a blue screen at a sandy beach in Hamilton, Ontario (45 minutes outside Toronto).  All of the grass, windswept dunes, billowing clouds as well as a 3D Hotel were later added to background.

One other notable location that had to be recreated through the art of CGI was the Avonlea Church (which also no longer existed) for the wedding of Anne’s adopted son, Dominic Blythe. The Church was recreated in 3Din CGI and is seen as Dominic and his French bride pull away in a honeymoon car and bid farewell to Anne, her grown-up family and the entire Avonlea community.

‍Anne of Green Gables: A New Beginning was not Kevin Sullivan’s first foray into the world of CGI. He developed significant experience with the technique in his film version of Mozart’s Magic Flute Diaries; a magical family friendly adventure through the world of one of the greatest operas. The film featured many magic-realism scenes that were executed in studio, using CGI to create both a fantastical and a real world in which the film’s opera was staged like a movie musical. 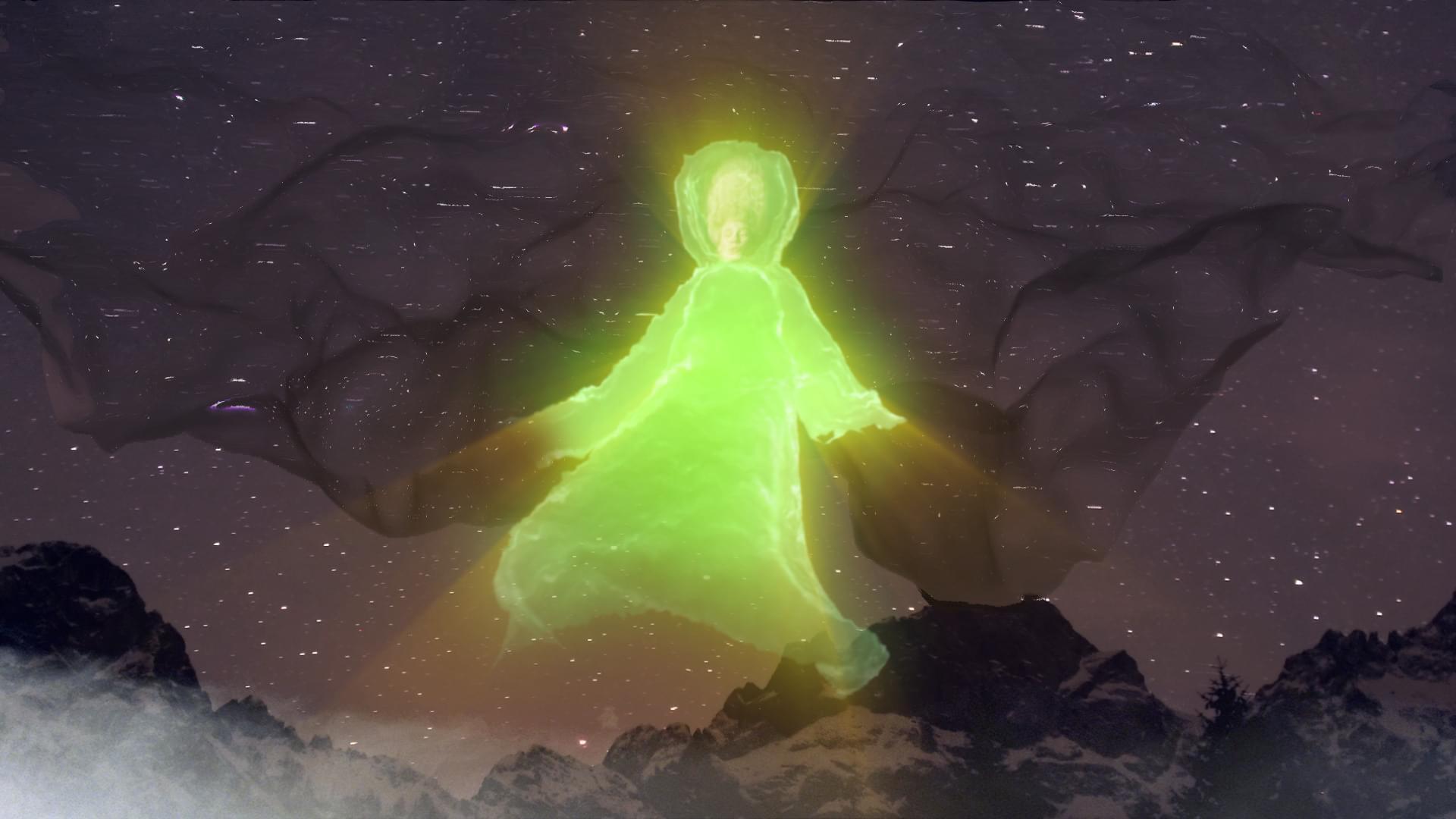 Certain live-action choreographed sequences were initially shot in Vienna and Salzburg with a large cast of dancers, singers and actors. The unit then moved from Europe back to Sullivan’s studio in Toronto where Salzburg streets, theaters, back-alleys, shops and the city’s famous castle were built on Sullivan’s exterior back lot and enhanced through CGI.

Some of the original sets from Sullivan’s series Wind at My Back were even reused to create Salzburg streets and cafes. Several lavish backdrops that were filmed in the Bavarian mountains at King Ludwig’s famous Neuschwanstein Castle were used in the Sullivan Studio back lot to create a fairy tale castle in The Magic Flute opera.

Pristine white-capped mountains  filmed in the Rockies in Whistler, British Columbia and later used to stage a woodland snow-set where the bird-catcher Papageno meets the opera’s Prince Tamino after he has slain a ferocious dragon in a mountain pass during a blizzard; all with the aid of CGI. 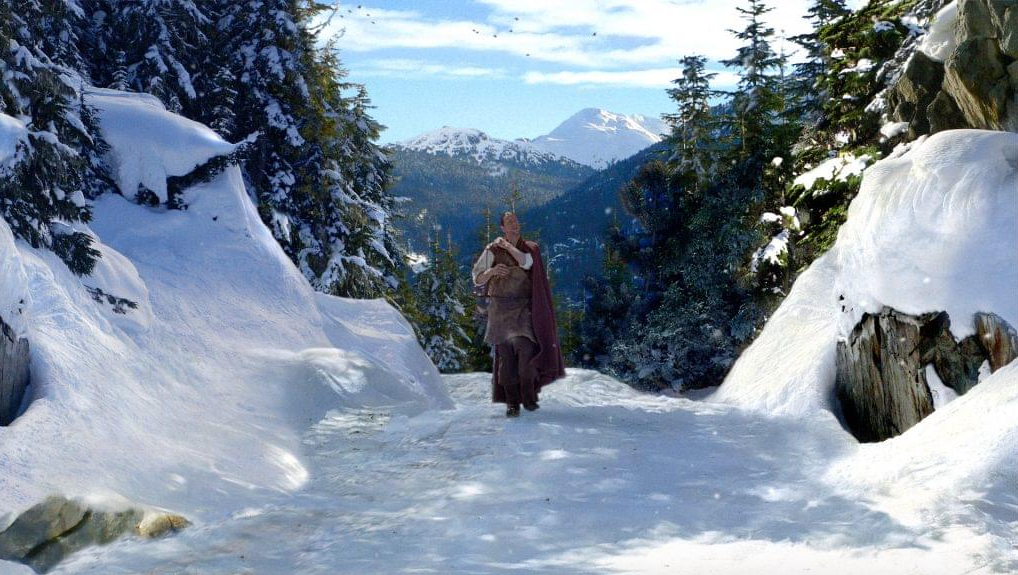 Most films and series produced today use CGI so expansively it is almost impossible to tell which scenes are filmed in front of Blue or Green Screen and which are actually filmed on- location. Next time you’re watching a film or series, take a look and see if you can figure it out.

*Below, an example of CGI used in the film Castaway 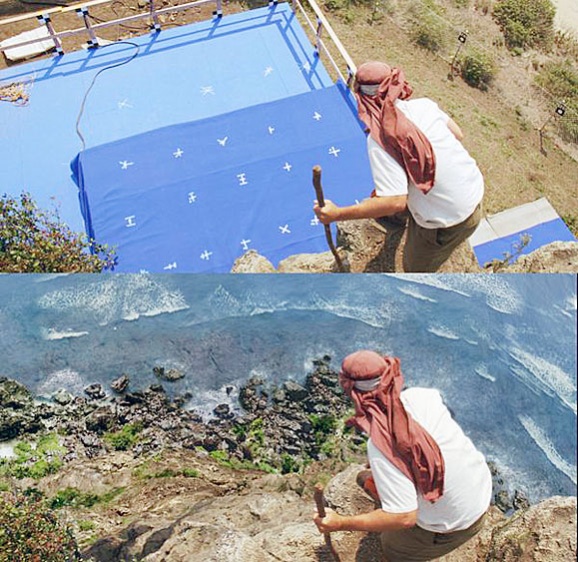